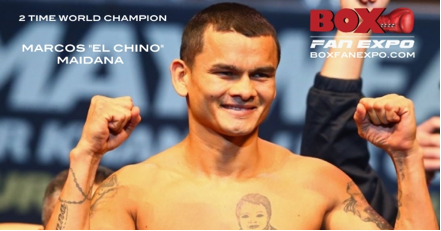 Las Vegas (April 26, 2017) – 2 Time World Champion Marcos Maidana has confirmed that he will appear to Meet & Greet his fans at the Las Vegas Convention Center for the 3rd edition of Box Fan Expo that will take place Saturday May 6, 2017 from 10am to 5pm, during Cinco De Mayo weekend. The Boxing Expo will also coincide with the mega fight between Canelo Alvarez vs Julio Cesar Chavez jr, that will take place later that evening.

Maidana will appear for the first time at this years’ Expo at the World Boxing Association “WBA” booth and will be signing gloves, photos and merchandise. Boxing fans will also have a great opportunity to take pictures with “El Chino” the Argentinean boxing star. Fans will also be greeted with surprises by Maidana and the WBA at this years’ Expo.

Maidana is an Argentine former professional boxer who competed from 2004 to 2014. He is a two-weight world champion, having held the WBA (Regular) super lightweight title from 2011 to 2012, and the WBA welterweight title from 2013 to 2014. An exciting and versatile pressure fighter to watch in the ring, Maidana was well known for his formidable punching power, always delivery incredible performances and was never stopped in any of his 40 professional fights.

Throughout the next 10 days leading up to the Event, there will be more announcements on the many stars that will commit their appearance at the Boxing Expo.