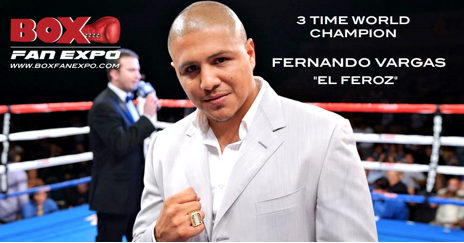 Las Vegas (June 26, 2018) – Three-Time world champion Fernando Vargas has confirmed that he and his Feroz Fight Factory Gym will appear, have a booth and hold a Meet & Greet with his fans at the Las Vegas Convention Center for the fourth Annual Box Fan Expo that will take place Saturday September 15, 2018 from 10a.m to 5pm, during Mexican Independence weekend. The Boxing Expo will also coincide with the highly anticipated rematch between Saul ‘Canelo’ Alvarez vs Gennady ‘GGG’ Golovkin, that will take place later that evening.

Vargas and the Feroz Fight Factory will have merchandise to sell to his fans, as well as photos and memorabilia.

Fernando Vargas, is a retired American boxer of Mexican descent and 3 Time world champion with a Pro record of 31 wins 5 losses and 22 KO’s. He who won a bronze medal as an amateur at the 1995 Pan American Games in Mar del Plata. His nicknames include “Ferocious”, “The Aztec Warrior” and “El Feroz”. Vargas was the youngest open national champion at 16 yrs old. The youngest boxing Olympian at 18yrs old and holds the record in boxing history as the youngest to become jr. middleweight champion at 21 years old.

Exhibitors such as boxing gear, apparel, new equipment’s, energy drinks, alcohol, supplement products, broadcasting media, sanctioning bodies and other companies who wish to participate will once again have a chance to showcase their brand to fans, media and the boxing industry.

Tickets to the Box Fan Expo are available online at:
https://boxfanexpo.eventbrite.com

Throughout the next few months leading up to the Event, there will be weekly updates on the many stars that will commit their appearance at the Boxing Expo. And for anyone in the Boxing industry or other Exhibitors (non-industry), who would like to be involved and reserve a Booth, contact Box Fan Expo: