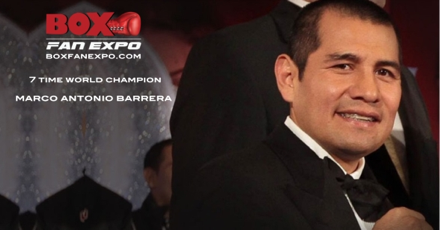 Las Vegas (April 17, 2017) – 7-Time World Champion Marco Antonio Barrera has confirmed that he will appear to Meet & Greet his fans at the Las Vegas Convention Center for the 3rd edition of Box Fan Expo that will take place Saturday May 6, 2017 during Cinco De Mayo weekend. The Boxing Expo will also coincide with the mega fight between Canelo Alvarez vs Julio Cesar Chavez jr, that will take place later that evening.

Barrera will appear for the first time at this years’ Expo at the Nevada Boxing Hall of Fame booth and will be joined by other top fighters, legends and boxing celebrities that will be signing gloves, photos and merchandise.

Barrera is well known for his trilogy with fellow Mexican legend Erik Morales, as well as his duology with Manny Pacquiao, and rivalry with Juan Manuel Marquez. ESPN ranked Barrera as number 43 on their list of the 50 greatest boxers of all time.

Tickets to the Box Fan Expo are available online
http://www.boxfanexpo.eventbrite.com

Throughout the next 6 weeks leading up to the Event, there will be weekly updates on the many stars that will commit their appearance at the Boxing Expo. And for anyone in the Boxing industry or other Exhibitors (non-industry), who would like more information on sponsorships opportunities or reserve a Booth, contact Box Fan Expo: