The fight will be part of a split-site championship doubleheader that will also pit WBA Lightweight champion Darleys Perez defending his title against Anthony Crolla from Manchester, England beginning at 3 PM ET / 12 Noon PT

”This has been one of the toughest camps of my career,” said Abraham. ”My coach Ulli Wegner and his assistant Georg Bramowski have pushed me to my limits. It’s been brutal at times, but it will all be worthwhile when my hand is raised on Saturday night. Martin is a good boxer and I expect him to give me a hard fight, but there is no way he is taking my title!”

Murray, who is contesting his first title at 168 lbs following three valiant attempts at middleweight, shares the Champion’s confidence and has vowed not to leave Germany without Abraham’s WBO belt.

”We’ve been studying Arthur carefully and I believe I’ve got him beat,” said the 33 year-old from St Helens. ”He is a great fighter, but he’s not changed his style in years, and in my opinion, he’s not evolved. It’s going to be a tough fight but I know it’s well within me to win. I won’t be leaving Germany without the title!”

”This is a real 50-50 fight,” said promoter Kalle Sauerland. ”And I think it will be Arthur’s toughest test for many years. However, he has never shied away from a challenge, and against Murray, I expect Arthur to prove why he is the number one fighter in the super middleweight division.”

Another man under no illusion of the danger Murray poses is Abraham’s long-time coach and mentor Ulli Wegner, who will be celebrating his 100th World title fight on Saturday night. ”For Arthur and I, a unification bout is the common goal,” said the 73 year-old. ”But first he must get past Murray, which will be no easy task!” 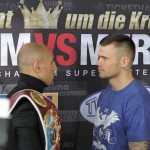 Boxing fans can enjoy this amazing card on AWE available on AT&T U-Verse, ch 147 and 1147 in HD, Verizon FiOS TV, ch 169 and 669 in HD, and numerous regional cable providers across the nation. Please check www.awetv.com for boxing updates.

AWE LIVE Boxing features live world title championship and elimination bouts showcasing today’s most exciting fighters. Since the inception of AWE’s live boxing events in 2011, AWE has earned multiple Boxing Writers Association of America nominations for “Fight of the Year” and has featured over thirty world class boxing events. In 2013, AWE showcased all live bouts featuring heavyweight David Price. AWE aired live the stunning upsets of Tony Thompson over David Price, along with Adonis Stevenson and Tony Bellew cards, who fought each other for the light Heavyweight championship; 2008 Olympic Gold Medal winner James DeGale. AWE brought boxing fans two of the most controversial bouts which saw Ricky Burns keep his Lightweight title against Ray Beltran. AWE fans have witnessed the explosive power of undefeated heavyweight Tyson Fury multiple times on the network, including Fury’s victory over Kevin Johnson. In 2014, AWE televised the crowning of lightweight champion Terence Crawford with his win over Burns as well as the exciting rematches between Carl Frampton and Kiko Martinez as well as Tony Bellew defeating Nathan Cleverly.

A Wealth of Entertainment (“AWE”) features a wide range of lifestyles and entertainment programming from exotic travel and outrageous homes to live world championship boxing. AWE is featured on over a hundred cable providers, including AT&T U-Verse, ch 147 and 1147 in HD and Verizon FiOS TV, ch 169 and 669 in HD. For more information, please visit www.awetv.com.