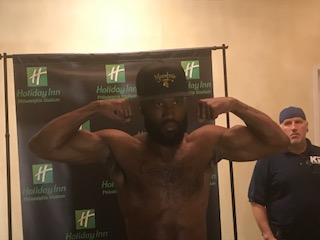 Robinson is promoted by King’s Promotions.

“I want to thank Marshall Kauffman of King’s Promotions for grooming me to be a world champion, and allowing me to be on this card,” said Robinson. “Zapata is a solid fighter, who likes to be aggressive. I am just looking to stay high and tight in our defense, and stay sharp, and it should be a nice fight.”

Robinson of Upper Darby, Pennsylvania has a record of 8-1 with six knockouts, with those eight wins coming in a row.

The 29 year-old is coming off the biggest win of his career as he won an eight-round unanimous decision over respected Christopher Brooker on December 1st at The 2300 Arena in Philadelphia.

Robinson also has a first-round knockout over previously undefeated Brandon Clark (2-0) on September 8th, 2017. Robinson completed a perfect 2017, by registering all eight of his wins during last calendar year.

In Zapata, Robinson is taking on a 12-year veteran who has faced eight undefeated opponents. The 33 year-old Zapata is a native of Bronx, New York by way of Honduras.

Zapata is looking for his 2nd consecutive win, as he is coming off a 2nd round stoppage over Freddy Oporta on September 30th in Honduras.

Said Marshall Kauffman of King’s Promotions, “This is a nice opportunity for Brandon. He is fighting a tough guy who has fought great competition. With a win, Brandon will be back on one of our cards this spring.”

Tickets for ‘Real Deal Showcase Series I’, priced at $125, $75 and $50 are NOW ON SALE and may be purchased at www.SugarhouseEntertainment.com