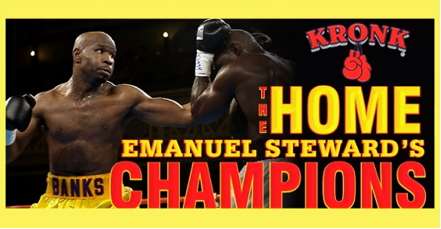 Las Vegas (March 2, 2017) – Kronk Boxing & Sylvia Steward-Williams (Emanuel Steward’s daughter) has confirmed that they will appear and have a booth at the Las Vegas Convention Center for the 3rd edition of Box Fan Expo that will take place Saturday May 6, 2017 during Cinco De Mayo weekend. The Boxing Expo will also coincide with the mega fight between Canelo Alvarez vs Julio Ceasar Chavez jr, that will take place later that evening.

Kronk Boxing will have the famous Kronk merchandise and apparel to sell to the boxing fans.

Founder of the Kronk gym and legendary trainer Emanuel Steward would have been proud of participating once again at this years’ Expo as he was one of the first to believe a Boxing Expo was long overdue and that it would be a huge success with fans and boxing industry people.

When Emanuel Steward first heard about the Box Fan Expo, he stated: “If you want to have a Boxing Expo, you got to do it big; and to do it big you need to go to Vegas. This is a boxing Fan’s dream.”

The legendary Kronk Gym made famous around the world by the late Emanuel Steward who produced a string of world champions including, Lennox Lewis, Wladimir Klitschko and Hall of Famer Thomas Hearns. Kronk closed its doors afterSteward’s death on October 25th, 2012. After three years of hard work and dedication the Kronk reopen the famous gym this past Memorial Day weekend.

“It took a lot of work,” said Steward-Williams, owner of Kronk Boxing/Sportswear. “It’s a labor of love, and it was my father’s legacy.