Shelestyuk vs. Herrera is the 10-round welterweight main event of a ShoBox: The New Generation tripleheader set for Friday, Nov. 4, live on SHOWTIME at 10:30 p.m. ET/PT(delayed on the West Coast) from Omega Products Event Center in Corona, Calif.

In the co-feature, undefeated cruiserweights Constantin Bejenaru (11-0, 4 KOs), of Catskill, N.Y. by way of Moldova, weighed 198.2 lbs. and Stivens “Superman” Bujaj (16-0-1, 11 KOs), of New York, came in at 197.5 lbs. The pair collide in a 10-rounder for thevacant WBC International and WBC Continental Americas titles.

Tickets for the event promoted by Banner Promotions, Thompson Boxing, Hitz Boxing and Joe DeGuardia’s Star Boxing are priced at $100 (ringside) and $70 (reserved). 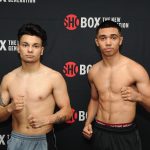 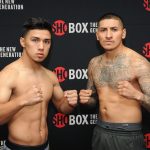 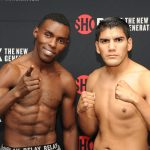 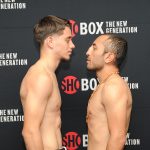 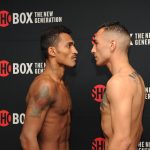 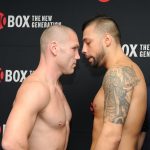 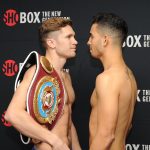 “Herrera is a good fighter, a tough fighter. I know he has defeated some good fighters like Mike Jones, who was a top fighter who’d been off a couple years. But I’m 100 percent ready. I expect a very tough and exciting fight but I expect to be much stronger and smarter.

“I’m excited for all the attention this fight and I are getting. I’ve always known that fans in America have known me but maybe now more than before. I think in the next year, I can become even more well-known.

“I’ve been working on strength and becoming more powerful. I think my boxing skills are already good, but my speed and power are better than before. I feel in sparring that I’m punching harder.

“I like to work the body. I like the fact you land enough of them early, they take a toll late. That’s one thing good about fighting as a pro. I feel good about my career; I hope to be fighting some of the best fighters in the division within a year.

“I’m sure Herrera will probably try and come at me; there’s no chance he can beat me at boxing. I like guys who come forward. They are good for me because I can counter and move side to side. And I’m ready to fight on the inside if necessary.

“I know I can improve on my last ShoBox fight. I made it closer than it should have been. If we had it over again I think I maybe stop him just because of what we’re been working on in the gym.

“Sparring with Shane Mosley has been huge for me. He’s such a great fighter. When I was younger, I’d watch his fights. Now we spar. He’s older but still very good. He knows all the tricks and gives me a lot of advice that helps me in and out of the ring. Everything he’s said to me, I’ve tried to apply.”

“I’ve been working a full two months for this fight so I’m ready. This is going to be a very good test for both of us, a great fight. He’s a good European boxer, another unbeaten for me. But I don’t feel like I’m coming in as the underdog at all. He’s got his strengths, I’ve got my strengths.

“There has to be a purpose for every punch. Each has to count. If he opens up and makes a mistake, I have to take advantage. I need to get him out of his rhythm early, force him out of his comfort zone and make him fight my fight.

“I’ll be the aggressor. But I’d love if he was the aggressor. I just think, though, knowing him, he’s going to try to box and win the rounds that way. I work all the time coming forward and that’s what I’ll do tomorrow.

“A kid from Chicago, like me, it’s hard to get anywhere in boxing without connections, so finally after fighting so long without a manager, I signed with Cameron Dunkin. I always knew I could be a good boxer, but never figured I’d be a boxer. But look at me know, I’m fighting on SHOWTIME and this fight couldn’t be coming along at a better time.”

“I feel your amateur career gives you a good foundation, like a beginner, but once you turn pro it’s a total different game. It doesn’t matter who has more experience as an amateur. As professionals, we all have to do our jobs here.

“I don’t know Bujaj, but I saw his fight with Junior Wright so I know he is tough.

“I work hard for every fight and this was no exception. We know we have to pay attention to detail. This is a dangerous guy but I am very confident.

“I definitely don’t expect an easy fight. I have to press the action. I need to make him as uncomfortable as I can.

“I don’t have a lot of pro knockouts but boxing isn’t just about power. Boxing is intelligence and mental; it’s not just a street fight for me.

“This is my second fight on ShoBox. I’m so happy to be back again after that last win over Zubov. The goal is to keep busy, come back early next year and then sometime by next year be ready to fight for a major title of some type.”

“I’m ready for any kind of fight. I’m a versatile fighter and I will have the height advantage.

“I feel ready now for the bigger fights, the additional exposure on SHOWTIME, the ratings, the titles, all of it. But I definitely will be even more after Friday.

“I don’t feel this is going 10 rounds. I feel I’ll break him down and eventually stop him. I feel I’ve got the skills and definitely the heart. I’m healthy and ready to go.

“I saw his last fight on ShoBox, and thought it was pretty decent. He’s pretty short for a cruiserweight. Although we’re both from New York, I’d never heard of him before.

“Camp went awesome with lots of sparring. In Las Vegas. I trained with Mayweather fighters like Ronald Gavril, Badou Jack and Caleb Plant. It’s been four years since I’ve fought a left-hander but I do not consider it factor.”

“I thank God and both my uncles for helping me get to where I am, for teaching me and for guiding me in every step of my life and in boxing. Without their influence and what they’ve done for me since I was 11, I feel I’d be dead today.

“I’m getting more and more experience. My goal is to work hard and, like my Uncle Acelino, make good fights and become a world champion”

“We’ve studied Mendez’ fighting style and have a lot of respect for his trainer, Joel Diaz. I know Mendez is very strong and comes forward. I don’t know if he likes it when his opponents attack from the sides but I’m ready to fight him on the sides, head-on and toe-to-toe.”

“This is my ninth fight with Joel and we know each other very well. Through the bad and good, he’s been there for me.

“I’m sure Freitas has confidence in his ability but like any other undefeated fighter he does well until he hits the wall, which is what Joel wants me to make him do. He wants me to punish him, take my time.

“I feel have I have natural power, can take a punch and have heart. Hit me as much as you want, but watch out once I connect and turn things around. My goal always is to break them down, starting with the body.

“I may not have the pedigree of some of these guys, but I’m learning defense, how to pace myself, staying poised and most importantly, just how to fight. The more experience, the more mature you become.

“Tomorrow I just want to be me and listen to Joel in the corner. I wouldn’t want to be standing in from of me. If he wants to stand and bang, let’s do it. I guarantee he’s the one going back after the first few moments.”