Fort Washington, MD (December 2, 2015) – Undefeated Forestville, Maryland super lightweight Mykal “The Professor” Fox (7-0, two KOs) will face his toughest challenge to date when he faces Adam “Bad Boy” Maté (18-6, 11 KOs) of Sopron, Hungary this Friday December 4 at the historic Rosecroft Raceway in Fort Washington, Maryland. The six-round bout will headline a stacked 8-fight lineup that will not have a single boxer with a losing record on the card.
The card is promoted by Kings Promotions and tickets are currently on sale ($40/$60/$75) at www.beltwayboxing.com or by calling 301-899-2430. Tickets purchased at the box office on fight night are subject to a $5 surcharge.

Fox has been in camp training under his father Troy, and he is ready to impress this Friday night.

“Training has been great. We have been working on technique and our craft and I am ready to go on Friday night,” said Fox.

In Mate, he is facing a fighter who is battle tested and fought all over the world, while Fox has just seven professional fights to show on his ledger.

“He has 24 fights. This is definitely the biggest fight of my career so far, I am super excited and fighting a guy with his experience will show where I am at in my career. It will show where I belong. My defense will keep me out of trouble and my offense will get me the win.”

At just 20 years-old and 28 rounds under his belt, this will be the first main event for Fox, but he is poised and ready to entertain the hometown fans. 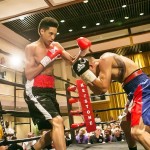 “This is my first main event, It is exciting. When I told my friends and fans that I was the headliner, they were excited to get tickets. I think the people like how I fight and I think they like me as a person.”

Another first will be Fox’s first fight since signing a promotional contract with King’s Promotions.

“It truly is a blessing being with King’s Promotions. With being the main event and my first with my promoter, it brings an excitement for me to perform and look like a main event fighter. Being that King’s puts on a lot of shows and they promote in my home area where I have had my fights, It is a great opportunity to grow with them. This fight I am doing it at home, but I want to take my show on the road and not only become a bigger name locally but nationally and internationally.”

“I am grateful for this opportunity and my father said that you can’t hide talent forever and on Friday night, this fight will show what I am capable of,”

Scheduled to appear in 6-rounds bouts:

Sam Crossed of Greenbelt, MD of Greenbelt. MD will make his pro debut in a Cruiserweight bout against fellow pro debuter Hampton Miller of Norwalk, CT.

Santario Martin (1-1) of Gainesville, FL will take on Nicholas Hernandez (2-1) of Reading, PA in a Middleweight bout.