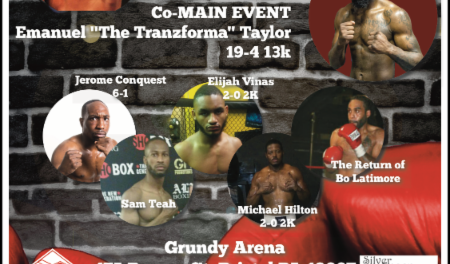 Bristol, PA (August 6, 2016) – Chazz Witherspoon scored his fifth consecutive knockout victory as he took out former world title challenger Mike Marrone in round two of their scheduled six-round heavyweight bout in the main event at the Grundy Arena.

The eight-bout card was promoted by D and D Promotions and Silver Spoon Promotions.

Witherspoon sent Marrone to the canvas in round one with a left hook. Seconds later it was a hard 1-2 that sent Marrone down for a second time.

In round two, Witherspoon landed a booming right that deposited Marrone on the canvas for a third time. Marrone got to his feet but the fight was waved off at 1:31.

Witherspoon of Paulsboro, New Jersey is now 35-3 with 27 knockouts. Marrone of Vero Beach, Florida is 21-6.

Samuel Teah won a four round unanimous decision over Samuel Amoako in a junior welterweight bout.

Elijah Vines stopped Julian Valerio in round three of their scheduled four round middleweight brawl.

In the first frame, Vines dropped Valerio with a short right on the inside. Valerio returned the favor after a furious exchange, Valerio put Vines on the canvas from a left hook. In round three, Vines drilled Valerio a multitude of times with power punches that continuously snapped the head of Valerio’s head back until a moment later when Vines landed some hard body punches and referee Hurley McCall stopped the fight at 2:37.

Vines of Philadelphia is 3-0 with three knockouts. Valerio of Brooklyn, NY is 3-4.

In round two, Ennis sent Murphy to a knee after landing a barrage of punches. Seconds later, It was a left to the body that sent Murphy down and the fight was stopped at 2:53.

Ennis of Philadelphia is 5-0 with five knockouts. Murphy of St. Louis, MO is 1-3.

Mike Hilton remained undefeated by stopping Cortez Reed at 1:57 in the fourth and final scheduled round of their cruiserweight bout.

Emanuel Taylor stopped Carlos Aguilera in round two of their scheduled eight round junior welterweight bout.

Taylor cracked Aguilera with a left hook to the ribs that dropped him. He could not get to his feet and fight was over at 2:07.

Leshawn Rodriguez demolished Jason Whar inside of one round of their scheduled four round middleweight bout.

Rodriguez dropped Whar three times in round one, with the last coming from a left hook and the bout was stopped at 1:55.

Rodriguez of Shirley, New York is 4-0 with four knockouts. Wahr of Virginia Beach, Virginia is 4-13.

Luis Perozo remained undefeated by winning a 4-round unanimous decision over Alberto Martinez in a lightweight bout.

In round two, Perozo scored a knocked down from a right hand.