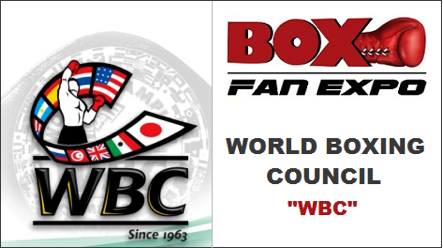 Las Vegas (February 27, 2017) -World Boxing Council “WBC” has confirmed that they will appear and have a booth to Meet & Greet their fans at the Las Vegas Convention Center for the 3rd edition of Box Fan Expo that will take place Saturday May 6, 2017 during Cinco De Mayo weekend. The Boxing Expo will also coincide with the mega fight between Canelo Alvarez vs Julio Ceasar Chavez jr, that will take place later that evening.

WBC will have merchandise, Fan pictures taken at their special photo booth with the green Belt, interactive games, meet & greet with Top Fighters and boxing celebrities.

The World Boxing Council is a Boxing elite sanctioning body and has as its maximum priority to work and protect for athlete’s safety and health inside and outside of the boxing ring. The WBC was founded in 1963 and lead by José Sulaiman who was unanimously elected on December 1975 as president and served in that capacity until the time of his death on January 16th, 2014.. His son Mauricio Sulaiman has succeeded to the presidency since then. The WBC is now composed by 165 countries from around the world. Don José Some of their greatest champions are Muhammad Ali , Mike Tyson, Julio Ceasar Chavez, Oscar de La Hoya, Sugar Ray Leonard, Floyd Mayweather,and Manny Pacquiao among others.