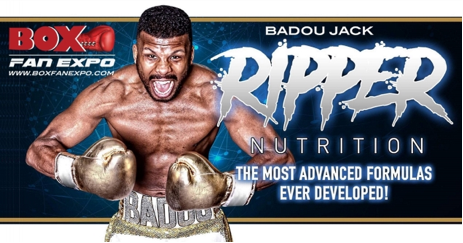 Las Vegas (March 13, 2018) – Two-Time World Champion Badou Jack has confirmed that he will appear, have a booth and hold a Meet & Greet with his fans at the Las Vegas Convention Center for the 4th edition of Box Fan Expo that will take place Saturday May 5, 2018 from 10am to 5pm, during Cinco De Mayo weekend.

Jack will once again appear at this year’s Expo where he will be launching and introducing his new “Ripper Nutrition” http://rippernutrition.com products. Jack will be signing gloves, photos and merchandise. Boxing fans will also have a great opportunity to take pictures with this boxing star also known as “The Ripper”. Jack will also be facing WBC Light Heavyweight Champion Adonis “Superman” Stevenson on May 19 in Canada. The fight will be promoted by Mayweather Promotions.

The Swedish professional boxer, who is promoted by Mayweather Promotions, held the WBC Super Middleweight title from 2015 to 2017. On April 24, 2015 he defeated Anthony Dirrell to win the WBC championship belt and defended it successfully against George Groves at the MGM Grand Las Vegas on September 12, 2015 during Mexican Independence weekend. He competed in a 2017 Fight of the Year candidate against James Degale that ended in a majority draw at Barclays Center in Brooklyn last January. He made his light heavyweight debut by defeating WBA World Champion Nathan Cleverly in August and will now look to become a three-time champion against Stevenson.

Tickets to the Box Fan Expo are available online at:
https://boxfanexpo.eventbrite.com

Throughout the next couple of months leading up to the Event, there will be weekly updates on the many stars that will commit their appearance at the Boxing Expo. And for anyone in the Boxing industry or other Exhibitors (non-industry), who would like to be involved and reserve a Booth, contact Box Fan Expo: