BROOKLYN, NY (Oct. 9, 2015) – The Brooklyn Brawl series makes its way to living rooms and sports bars beginning this Columbus Day weekend as the Aug. 25 event has three scheduled airtimes on MSG Network. Four selected bouts from late summer’s Boxing At The Beach affair will air on MSG on Sunday, Oct. 11 at 10 p.m., and on Monday, Oct. 12 at 10:30 a.m. and 4 p.m.
“We are excited that New York sport fans have the ability to connect with world class athletes that live and train in the five boroughs via our MSG Network partnership,” said boxing champion-turned promoter Dmitriy Salita. “The Brooklyn Brawl series continues to be one of a kind. It features many local boxers that have tremendous accomplishments inside the ring. The broadcast show features cross-town rivals fighting for recognition in New York City, which has impact on their careers in the world of boxing.”

The next Brooklyn Brawl is scheduled for Thursday, Oct. 29, at the Aviator Sports and Events Center in South Brooklyn. For ticket information and updates please log on to SalitaPromotions.com and AviatorSports.com. Follow all the action via social media leading up to the event – and on fight night – at @BrooklynBrawlNY on Twitter and Instagram, or by accessing the hashtag #BrooklynBrawl.

Oct. 29 broadcast information will be announced at a later date. Interested corporate partners should contactMark Fratto at mfratto@linacremedia.com.

For media information, Contact, Marc Abrams at 856 287 7611 or phillyboxing@gmail.com ; www.abramsboxing.com

About ESPN3
ESPN3 is ESPN’s live multi-screen sports network, a destination that delivers thousands of exclusive sports events annually. It is accessible online at WatchESPN.com, on smartphones and tablets via the WatchESPN app and streamed on televisions through Amazon Fire TV and Fire TV Stick, Apple TV, Chromecast, Roku, Xbox 360 and Xbox One. The network is currently available to more than 99 million homes at no additional cost to fans who receive their high-speed Internet connection or video subscription from an affiliated service provider. The network is also available at no cost to approximately 21 million U.S. college students and U.S.-based military personnel via computers, smartphones and tablets connected to on-campus educational and on-base military broadband and Wi-Fi networks.

About Brooklyn Brawl
Brooklyn Brawl is a series of electrifying New York City-based boxing events showcasing the talents and skills of fighters from throughout the city, across the country and around the world. Brooklyn Brawl fighters include veteran boxers working their way toward a world title shot, as well as talented prospects, many of whom have already won prestigious national and international amateur titles, including Golden Gloves championships and others. Young contenders often challenge veteran boxers in exciting crossroad title fights that bring winners one step closer to a world title. 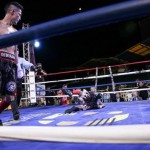