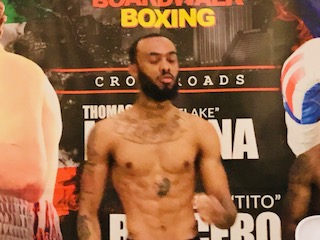 PHILADELPHIA (September 21, 2021)–It will be a battle of featherweight contenders when Donald Smith takes on Elijah Pierce in the eight-round featured bout of a great night of boxing on Saturday, October 9th at the 2300 Arena.

The show is promoted by RDR Promotions.

Smith of Philadelphia has a record of 12-1 with eight knockouts. The 28 year-old Smith is a five-year professional, won his first 10 bouts. In his last bout, Smith stopped Jonathan Leona Ramos on May 8th at the 2300 Arena.

Pierce of Midwest City, Oklahoma is 11-2 with 10 knockouts. Pierce, 24 years-old, is a five year pro who won his first seven bouts, which included wins over Candelario Rochin (4-0) and Divante Jones (9-1). He also stopped undefeated Irvin Gonzalez (9-0). Pierce has won two in a row, and in his last bout he beat Mike Fowler in two rounds on August 14th in Atlanta.

Nafear Charles (7-0-1, 7 KOs) of Philadelphia returns to his hometown and will fight an opponent to be announced in a lightweight tussle.

RDR Promotions fighter Rashan Adams of Philadelphia will make his long awaited and much anticipated pro debut against an opponent to be announced in a super featherweight bout.

In a battle of pro debuters, Rah’quand McDaniel takes on Soslan Alborov of Philadelphia in a super welterweight contest.

RDR Promotions fighter Raekwon Butler (3-0, 2 KOs) of Brooklyn, NY will fight an opponent to be named in a super lightweight bout.