BROOKLYN, N.Y. (Oct. 14, 2015) – When undefeated middleweight titleholder Gennady Golovkin stepped into the ring at Madison Square Garden last May and knocked out Daniel Geale – logging what was at the time his 17th-straight TKO victory – many New Yorkers took notice of the Kazakh boxing champion for the first time.

Now, when GGG tilts with David Lemieux this coming Saturday at “The World’s Most Famous Arena,” he brings with him a global following. And for at least two of his Kazakh countryman and boxing colleagues who now make their homes and train in the Borough of Brooklyn, instead of saying, “I told you so,” or “He’s all ours, we knew him first,” they’ll simply be beaming with pride among the thousands of spectators at “The Mecca of Boxing” this weekend.

Undefeated junior lightweight contender Dimash Niyazov of Bensonhurst – a Brooklyn police officer whose story was chronicled by the Wall Street Journal this past August, and whose next Brooklyn Brawl fight is Oct. 29 at the Aviator Sports and Events Complex in South Brooklyn – was born in Kazakhstan and came to New York when he was 13 years old. Like many, Niyazov believes that as big as luminary as Golovkin currently is, as he continues to amass world titles, add to his incredible 33-0 record and increase his stunning 30 KO total, his star can continue to rise to the highest apex of boxing today.

“Right now he’s one of the biggest things in boxing,” said Niyazov, who himself is undefeated as a pro at 8-0-3 (5 KOs). “Boxing people talk about him like he might replace Floyd Mayweather at the top. He’s at least in that neighborhood. I’m very proud because he’s from my country, he’s from my homeland. I’m very proud when someone from my country succeeds in any sport, but especially because it’s boxing and I’m a boxer. It inspires me because I see him and I think I can be the same thing.”

For Bakhtiyar Eyubov – Niyazov’s friend and training partner at Fight Factory Gym in Gravesend, Brooklyn, and a native of Aktobe, Kazakhstan – the connection to GGG runs even deeper. The power-puncher, who improved to 8-0 with eight pro KOs this past Aug. 25 in Coney Island, is considered by many to be the second-hardest Kazakh hitter in contemporary boxing, ranked only behind Golovkin. In a nation with many amateur champions who oftentimes struggle to make the leap into the pro ranks, the boxing squared circle is particularly tight.

“I am certainly a fan of GGG, I was in camp with him when we were amateurs. On BoxRec I am rated second behind him in Kazakhstan,” said Eyubov. “He is a great fighter, I am seven years younger and will carry the knockout torch. I am honored to follow in the Golovkin path. He set the stage for us, a great fighter!”

Perhaps summing up the emotions of a nation, Niyazov concluded, “Whenever he fights, I feel like the whole country of Kazakhstan and everyone with ties to that country is in his corner. GGG is at a level right now where everyone is looking up to him, he carries a whole country on his back. When he wins, I win. We all win.”

“With Golovkin and Wladimir Klitschko dominating boxing right now, many of the fighters in our Brooklyn Brawl series are trying to follow in their footsteps. Dimash and Bakhtiyar are no exceptions,” said boxing champion-turned-promoter Dmitriy Salita. “Many Brooklyn Brawl participants are from former Soviet countries and made their homes in New York City to make a name for themselves in the world center for professional boxing.”

On Thursday, Oct. 29, the Aviator Sports and Events Center in South Brooklyn will serve as the proving ground for many New York City-based rising stars. Niyazov will have his mettle tested once again after improving his record with a six-round Aug. 25 Boxing At The Beach unanimous decision victory over local fighter Ariel “Fuego” Duran in a Brooklyn-Queens crosstown rivalry bout. 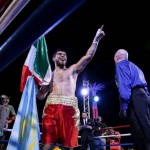