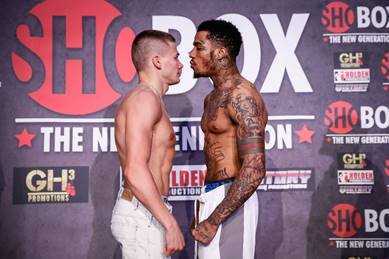 Philadelphia’s rising prospect Smith (11-0, 5 KOs) takes on the hard-hitting Baranchyk (14-0, 10 KOs), who trains in Los Angeles and fights out of Miami. This will be Baranchyk’s fifth appearance on the ShoBox series, and his sixth consecutive fight in his adopted hometown of Miami.

“I respect all fighters, but he’s talking a little smack,” Smith said right after both fighters weighed in at exactly 140 pounds. “It doesn’t matter where we fight. I’ll fight him in his own backyard if I have to.”

Tickets for the event promoted by GH3 Promotions and Tony Holden Productions are priced at $35, $55, $65 and $75 and are available for purchase now at buffalorun.com.

KEENAN SMITH:
“I’ve been through a lot and it’s been hard, but I’ve been using it as motivation.

“I can box and I can punch. I’m not looking to go in and trade with this guy.

“I liked going away for camp for the first time. It made me focus and just kept my mind on boxing.

“I’m not worried about the hometown advantage.

“I’ve been training hard for this fight and tomorrow you’re going to see the best. We are looking to kill the beast. [Baranchyk] comes to fight, he swings a lot of wild punches. I’m a boxer and a puncher, I’m good at making fighters feel uncomfortable. It’s a blessing to be up here, and it’s a blessing to fight on ShoBox and it’s a big opportunity to move up the ladder.”

IVAN BARANCHYK:
“Training camp went great and we did eight weeks. I’m going to be shortening my punches up. I know Keenan is an American-style fighter and will be doing a lot of moving forward.

“I love knockouts and haven’t had one in my last three fights. I can’t wait to get another one tomorrow.”

“Everything is perfect in Los Angeles for me. The weather and the training are amazing.

“Everyone knows I had a great fight with Abel Ramos on ShoBox. It’s a pleasure people think that was the fight of the year, and maybe the best ever on ShoBox, but I’m just focused on the future.”

KENNETH SIMS JR.:
“I’ve had some good friends recently who have lost their lives, and it’s been emotional. I haven’t been using my head and I want to get back to boxing.

“I love punching to the body. I lot of people think I lack power, and I get hit with a lot of punches. My goal is to be a pure boxer and to keep putting my punches together. .

“I feel like I’m an exciting fighter. I’ve been fighting since I was 8 years old and I’ve put in the hard work.

“I think my jab is going to be the difference and a key in this fight. That and my footwork.

“I had a good training camp, no distractions. I was focused. I’m ready to put on a great show.”

ROLANDO CHINEA
“I’m a lot stronger than I was in my last fight. This is the best I’ve felt for any fight.

“My nine month layoff doesn’t mean anything. It doesn’t make any difference

“I’ve been stalking Kenneth for a while now and we’ve watched a lot of tape of him.

“People still don’t believe in me, and I still have a chip on my shoulder. I’ve fought some experienced guys and tough guys on the ‘A’ side. I’m ready to move from the ‘B’ side to the ‘A’ side.

“I’m going to show I’m here for good. You are going to see a new Rolando Chinea tomorrow night.

“I’m a workhorse and at times I’m my own worst critic.

“I watched a lot of boxing growing up. Felix Trinidad was my favorite.”

“I know people are still talking about the eighth round of my last fight on ShoBox against Davila, and the crowd was going crazy, but I never focus on the crowd. I just focus what I have to do in the ring.

“I’m an old-school fighter and I’ll fight anyone. We can go out in the back alley and fight.

“I loved Sugar Ray Robinson and the approach he took in his fights.

“But at the end of the day a lot of old-school fighters have had to just get it done, fight by fight, to keep putting food on the table.

“I don’t see this as a big step up for me. I’m a pro now and I do everything like a professional. It’s been hard work, but that’s what it takes to become a world champion.

“I’m honored to be fighting on SHOWTIME once again. I’m an entertaining fighter and I put a lot of pressure on myself.”

“I need to mature more as a fighter. I wasn’t as prepared for my last fight as I should have been.

“I should win this fight easy. I watch the ShoBox fights I’ve been in and I’ve used different styles.

“We’ve worked on everything for this fight: quickness, defense, movement. If he wants to bang it out I’ll be ready for whatever he brings.

“I’ve busted my ass in the gym every day and I’m ready. This is where all the hard work pays off.

“My last knockout was a KO of the year candidate. Everyone knows I’m an exciting fighter and I’m a prospect looking to make things happen.

“The knockouts are addictive and it’s important to remember to stay humble and know who I am as a fighter. We’ll take them, but I’m not looking for the knockout.

“We’ve worked on the mistakes we’ve made in the past and corrected all the problems we’ve seen.

The pillow is only going to come out if there is some trash talking, and I know there will be. So you’ll be sure to see the ‘Night, Night’ pillow.”

“Last time I fought on ShoBox I did not strategize enough like I should have.

“He might bring the pillow into the ring, but it won’t make it out after the fight. He’ll be able to use it on himself.

“I’ve got to take him out of his game. I have to take away his biggest weapon, his right hand.”