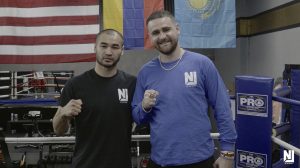 Beverly Hills, Calif. (May 23, 2019) – No Limit Mindset is pleased to announce the signing of welterweight prospect Sagadat Rakhmankul to a managerial contract.

Rakhmankul of Taraz, Kazakhstan, and now lives in Northridge, California has a record of 4-1 with two knockouts.

He was the champion of Kazakhstan Champion of “Spartakiada Kazakhstan”, as well as Champion of International Tournament in Albania, Simkent, Almaty, Belarus, Finland, Azerbaijnan, and Kingistan.

Rakhmankul is coming off a 3rd round stoppage over Brandon Adams on March 16th in Hollywood, California.

He is now being trained by Hall of Fame trainer Buddy McGirt.

“Saga is a special fighter! Buddy McGirt told me he had a fighter he wanted me to take a look at, and it didn’t take very long for me to realize that this young man has talent that can’t be taught. Buddy will add a few things to Sagadat’s style that is going to make him a serious problem at 147. We are going to get him a win in June, and then bring him right back in August to keep him as busy as possible. I am excited to add him to growing list of talent,” said Shane Shapiro of No Limit Mindset LLC.

Rakhmankul will be in action on June 14th in Tijuana, Mexico against 74-fight veteran Daniel Armando Valenzuela.

“Shane Shapiro is a manager like none other in this sport. He has done so much for me in a short time with his actions, and for a person like me and where I come from, that means everything. Shane and Buddy McGirt’s belief in me, give me all the confidence in training and in the fights that I will be competing for a world title in no time. I am getting high level sparring, top notch training, and a manager who allows me to put all my focus into my craft. This is a dream come true,”said Rakhmankul