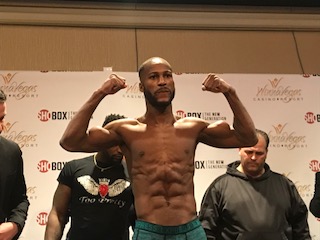 PHILADELPHIA – Samuel Teah pulled an upset last November at the 2300 Arena that outshined any other during 2018. Teah defeated the favored Kenneth Sims, Jr. of Chicago (13-1-1, 4 KOs) with a convincing unanimous decision, and he did it on the nationally televised SHOBOX TV series to boot.

Although going into the fight, their records were in the same ballpark (Teah was 14-2-1), Sam was still rebounding from an earlier so-so performance on SHOBOX that had some – certainly Team Sims – thinking that Teah couldn’t perform at the next level. However, Teah surprised everyone and scored the best win of his five-year boxing career. For that feat, he earned his first Briscoe Award.

The awards, named after Philly middleweight boxing legend Bennie Briscoe, have been recognizing the best achievements of the Philly boxing scene since 2007.

The Briscoe Awards are presented by Philly Boxing History Inc., a 501c3 Non-Profit organization, dedicated to preserving and honoring the great legacy of boxing in and around the city of Philadelphia. For more information, call John DiSanto at 609-377-6413.