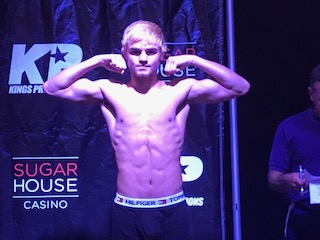 Philadelphia, PA (September 25, 2017) -This Friday night, undefeated bantamweight Christian Carto will headline a 10-bout card when he takes on his toughest foe to date in Alonso Melendez at The 2300 Arena in Philadelphia.

The card is promoted by King’s Promotions.

Carto (11-0, 11 KOs) of Philadelphia has developed into one of the top prospects in the Philadelphia region and combined with his growing fan base, Carto has become a must-see attraction.

“Everything has gone great in camp. I feel really good for Friday,” said Carto.

In Melendez, he is fighting a tough fighter from Mexico who sports an impressive mark of 14-1 with 12 knockouts.

“I have seen a few videos of him, and I know he is a southpaw. He is a good fighter, and on paper it looks like he is my toughest fight, but I can tell you for sure after the fight.”

Ever since he was an amateur, Carto has been a popular fighter, drawing large crowds, but since becoming a professional, Carto is starting to build into an attraction, where he is starting to acquire more and more fans with each fight.

“I am starting to notice that my fan base is growing. That makes me feel good that people want to come out and see me fight.”

This being his 12th fight in 14 months, Carto has kept a busy schedule, and should everything go well on Friday night, Carto could see more action as 2017 closes out.

“I definitely want to get one more for sure and possibly two more fights before the year ends, but first things first is Friday and it’s going to be a good night of boxing.”

Two fights scheduled for the Eleven Sports broadcast will pit

Amir Shabazz (4-1) of Philadelphia will square off with Alan Lawrence (1-0, 1 KO) of Newark, NJ in a light heavyweight bout.

The first bout begins at 7 PM ET and the broadcast will begin at 9 PM ET.