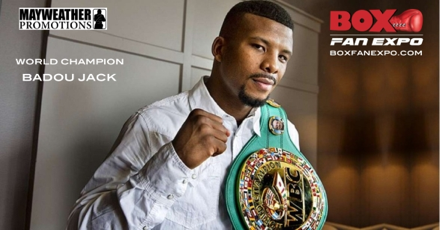 Las Vegas (May 1, 2017) – World Champion Badou Jack has confirmed that he will appear to Meet & Greet his fans at the Las Vegas Convention Center for the 3rd edition of Box Fan Expo that will take place Saturday May 6, 2017 from 10am to 5pm, during Cinco De Mayo weekend.

Badou Jack, is a Swedish professional boxer who held the WBC Super Middleweight title from 2015 to 2017. On April 24, 2015 he defeated Anthony Dirrell to win the WBC championship belt and defended it successfully against George Groves at the MGM Grand Las Vegas on September 12th, 2015 during Mexican Independence weekend. He went on in defeating another great champion in Lucian Bute to retain his belt and then had a Majority draw against Gold medalist James Degale at the Barclays center in Brooklyn New York on January 14, 2017. He has recently decided to move up in weight and challenge the top light heavyweights in the division.

Tickets to the Box Fan Expo are available online at:
http://bit.ly/BoxFanMayweatherPromo